Other than to visit the places I mention, the only real tip for this day was…

Tip #011: Bring a poncho.
December in this region of Peru is rainy season.

For the majority of our travels through Peru’s Sacred Valley region, it rained. We had come prepared and our entire party was outfitted with blue ponchos to ward off the precipitation.

We had secured the services of an owner of a large van who agreed to take us on a tour of the Sacred Valley. This is where Tip #003 (from two days ago) comes in handy because I doubt our band of travellers would have discovered Raul had it not been for the Spanish-speaking duo among us. We eschewed a traditional tour provider because we didn’t want to be on anyone else’s schedule. Plus we didn’t want to do the typical round trip tour and wind up back in Cusco. Due to our itinerary, we needed to finish today’s outing in a spot that is the halfway mark for traditional Sacred Valley tours (that would be Ollantayambo for those who simply must know now and can’t wait until the proper moment in this narrative).

Our tour started in Qorao where not only were we able to stroll through a market and pick up knit hats, jewelry, and socks…

Instead of a fire sale, they were holding a "flood sale"

…but it even began to snow so we were able to enjoy a white Christmas 12 degrees south of the Equator. Okay, the picture below does it no justice, but those white streaks are large blobs of snow.

Next stop was an animal sanctuary, the Santuario Animal de Ccochahuasi, inbetween Qorao and Pisaq. With ponchos donned and umbrellas in hand, we walked around the grounds and saw llamas, alpacas, Andean bobcats, pumas, and condors (such as the one below).

When taking a picture of an avian, it is traditional to say "Watch the human!"

Our first installment of seeing an incredible pile of stacked rocks (and despite those words, there is no sarcasm meant or implied because one stands – even in the rain – in freaking jaw-dropping awe of the amazing architecture and engineering the Incas used, had, and implemented when they built this and other places) was the ruins of Pisaq.

For your viewing pleasure, a trio of shots from Pisaq…

After a lovely buffet lunch at El Maizal in Urubamba (for only S/.35…such a deal for Peruvian standards like choclo and lomo soltado), our next stop was the even more-impressive stacked pile of rocks at Ollantayambo.

The view looking up at Ollantayambo, Peru 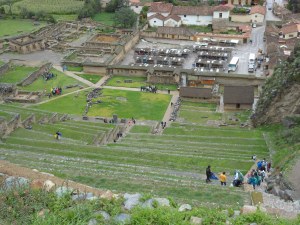 The view looking down

Pictures, and my horrible snaps are definitely no exception, cannot do justice to this place or to Pisaq. These sites are true marvels.

We finished our day with a train ride (courtesy of PeruRail) from Ollantayambo to Aguas Calientes (the town just outside Machu Picchu) and settled into our hostel for the night.

Coming Up Next: Fourth Day of Five – Machu Picchu

sinpolaris is the psuedonym of a guy who likes to write.
View all posts by sinpolaris »